Paul Bristow2017-06-19T16:45:21+02:00
On June 14th 2017, representatives from Pangloss Labs were invited to participate to the UNHCR annual consultation with NGOs.  From the sustainable development innovation lab, Paul, Charlie & Gianluca decided to dedicate one day to this.  With our partners from the Global Humanitarian Lab (based at the Palais de Nations), we exhibited some of the things that digital fabrication - and more importantly the entrepreneurial, problem solving mindset around it - could enable in refugee environments.    It was an eye-opening day for all of us, and each of us decided to tell the story in our own words. END_OF_DOCUMENT_TOKEN_TO_BE_REPLACED
By Paul BristowFab Lab, Sustainable Development Lab, Urbanism LabComments OffRead more... 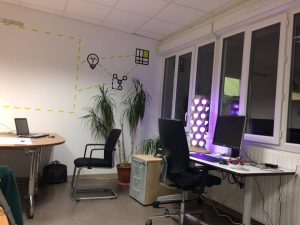 On the 12th of January a small, determined group met at Pangloss Labs in Ferney-Voltaire to discuss why there isn't yet a Pangloss Labs Geneva site and what to do about it. In a nutshell, although we have found some spaces in Geneva that meet our original half office / half workshop criteria, they are very few and far between.  With the rent costs being much higher in Geneva than neighbouring France, to replicate directly what we did in France would need 45 people willing to pay a proportion of the rent, before we have the space.   In addition, leases in Geneva tend to start at 5 years.  With some of the offers we have, on projects under development, we'd need 45 people willing to commit to contribute to a collaborative association for 5 years, starting in 1-2 years time.  That's almost impossible to do. So, with the facts on the table, and with the aid of some decent French wine, we brainstormed on the possible ways forward. 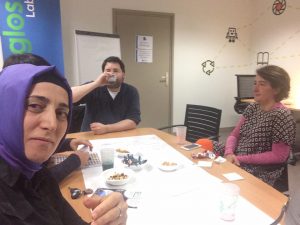 With lots of whiteboards, and different experiences and backgrounds we came up with the following plan: This doesn't solve the problem of a large maker space in 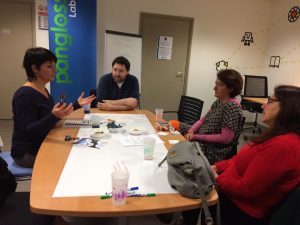 Geneva, but it does solve the problem of how to get the other Innovation Labs really working for those members unable to easily get to Ferney-Voltaire and it provides something concrete as a partnership with our other innovation space friends around Geneva. Once things are up and running, we can decide if we need another physical space in Geneva, or if working collaboratively with existing spaces is sufficient. What do you think?
By Paul BristowBusiness & Economics, Urbanism LabComments OffRead more...