A Brief History of the Hydrogen Bicycle

History of the Hydrogen Bicycle

A brief history of hydrogen-powered bicycles, or simply hydrogen bike or H2 bike. The information and images are the result of research on the Internet between October 2018 and February 2020. Sources are added at the bottom of the document. Certainly, this story is not perfect, but it gives a good impression of past projects.

The first hydrogen-powered electrically-assisted bicycles were built in research enviroments.

The company Aprilia became quiet about its H2 bike around 2005. There was the American WL Gore & Associates who presented an evolution of the bikes of Manhattan Scientifics and Aprilia at the Fuel Cell Expo 2005 in Japan, but without any commercial success.

But the idea was disseminated. Universities, research centres and enthusiasts immersed themselves in the world of hydrogen, fuel cells and bicycles. Here is a review of the achievements.

Since its first prototypes, ENEA in Rome has not stopped developing hydrogen bicycles. Their 2009 model worked with a fuel cell of only 50W (6V x 8.5A) with 900 litres H2 on board. The autonomy was thus more than twice that of a conventional pedelec. Or, on the occasion of the Formula E Grand Prix to be held in Rome in April 2019, ENEA participated with a hydrogen bicycle in the E-Parade of ecological 2, 3 or 4-wheel vehicles.

Besides the more traditional bicycles, in 2012 futuristic prototypes were conceived by visionaries. Examples are the design model by the Swede Johan Persson for Aprilia, or the “Hydogenia”, a hybrid between pedelec, rickshaw and fuel cell from IFAM (Fraunhofer Institute for Manufacturing Technology and Advanced Materials), Dresden.

More recent are the prototypes of Vorradler (Germany 2014), Tc Mobility (Italy, 2015), Alex Bevan from Birmingham University (United Kingdom, 2017) with H2 internal combustion engine or the bicycle by Ankica Đukić at the University of Zagreb (Croatia, 2017).

The Deutsches Zentrum für Luft- und Raumfahrt (DLR) developed a pedelec shown in 2014. This bicycle is now in their museum. DLR also developed a cargo bike. The technology is now exploited by Rytle GmbH in Hamburg, Germany.

At the Fraunhofer Institute ISE in Germany the LiteFCBike had been developed since 2016. This complete fuel cell system with hydrogen storage in twelve metal hydride cartridges and buffer battery can be mounted on any electric bicycle replacing the battery. In combination with an electric bike conversion kit almost any bike can be converted into a hydrogen bike. The energy stored with the kit is about 270Wh, so only half of a standard pedelec battery (about 500 Wh).

The German Masterflex AG had a little more success. Suppliers of fluid handling components and analysis systems, Masterflex began to get involved in the PACs business in 2001. The prototype of its HyBike with a 250W PEM and 45 grams of hydrogen on board was shown at the Hannover Messe 2004. In 2007, the city of Herten in Germany, a champion in the application of green technologies, bought ten HyBikes for €70'000. The hydrogen was to be supplied by its "Blue Tower" factory, but apparently there were technological problems. In the meantime Masterflex built the CargoBike together with the German bicycle manufacturer Hawk Bikes Entwicklung & Marketing GmbH. The Deutsche Telekom tested 14 CargoBikes in Berlin in 2008. There was no follow up from these prototypes, and in April 2011 Masterflex announced that it had divested its bicycle business.

The French company Gitane (Cycleurope Group) presented its prototype hybrid called Alter Bike in Nice in May 2013. It had been developed in collaboration with the French companies Pragma Industries and Ventec. The hydrogen is stored in interchangeable and recyclable metal-hydride capsules. The Alter 2 bike appeared in 2016.

The hydrogen bicycle αlpha is a development of Pragma Industries (Biarritz, France). The project is supported by ADEME. Pragma Industries had presented a prototype in 2015. These bicycles weigh 25 kg, comparable to the weight of an electric bicycle. They were given a price tag of €7'000, with the prospect of reducing the price to €3'500 by 2020. There are several projects using the αlpha such as the CARGHO project, which is a fleet of hydrogen bicycles tested by users in Chambéry and at Savoie Technolac, or also the Bhyke project in Cherbourg and Saint-Lô in the Manche with a fleet of 20 bicycles. Pragma Industries has also unveiled hydrogen eTrikes for the last meters in the delivery chain.

The MovR cargo bike by Rytle (Bremen, Germany) has been on the market since 2018. The company is a spin-off project of DLR's Fuel Cell Power Pack (FC PP).

Atena Scarl is the high-tech centre for energy and the environment in Italy. Its flagship technology is a small fuel-cell system that is put on hydrogen-powered bicycles, scooters and micro cars. The systems are equipped with interchangeable cartridges or can be recharged independently. The hydrogen bicycle is supported by ENEA, Università Parthenope di Napoli and Università degli Studi di Perugia. In 2019, three models were available: Touring 250, Sport MB250, Sport MB500, but without price or point of sale.

In September 2019 CYCLEUROPE and STOR-H presented the Gitane Sneaker, a hydrogen-powered three-wheeled bicycle. The electric motor has a power of 250W. Two metal hydride cartridges provide a range of 50 km. The company Aaqius, supplier of the returnable cartridges, plans to create a local network of distributors. 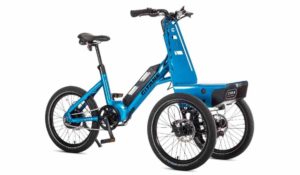 List of the most important web pages visited, almost complete, in alphabetical order :