The components of the hydrogen bicycle are all available and have been tried. The bicycle was run on hydrogen at the Science Festival 2021

The hydrogen bicycle ist shown in the parc of the Château de Voltaire at Ferney-Voltaire. 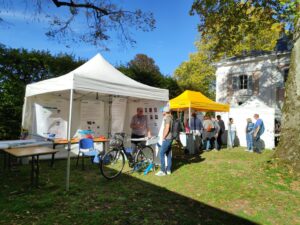 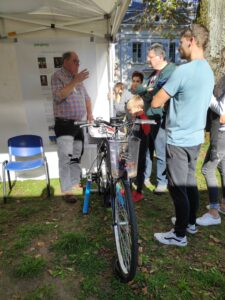 Many thanks to Silvia Fabiani for One Minute of Fame on Instagram. 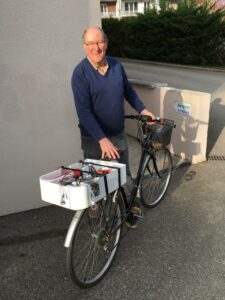 The complete system is presented in the parc of the Château de Voltaire at Ferney-Voltaire. Visitors could pedal the bicycle mounted on a stand. 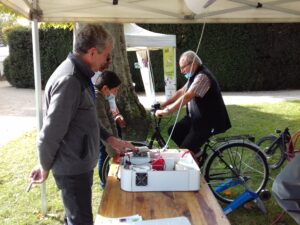 July 2021 The controller of the hydrogen bicycle takes shape

Charles and Paul are finalizing the processor for the hydrogen bicycle. A ESP 32 microcontroller unit reads various current sensors and controls the fuel cell. 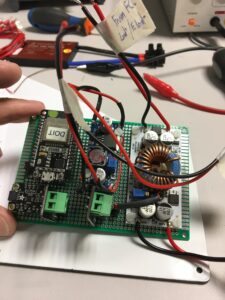 Refuelling the hydrogen bicycle remains a challenge. We finally decided to work with pressurized hydrogen in a 2 litres bottle for storage on the bicycle. With a few OTS components we were able to fill the small bottle from a larger bottle. 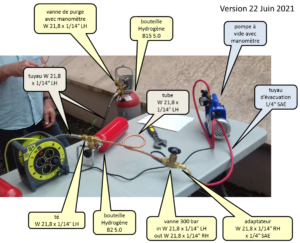 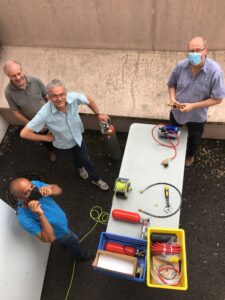 Fuel cell, hydrogen bottle and controls with buffer batterie all fit into a box which can be mounted on the bicycle. The box with compartments for the various components was 3D printed in the FabLab. 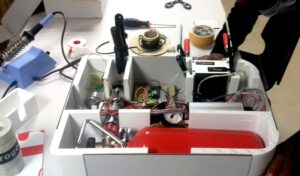 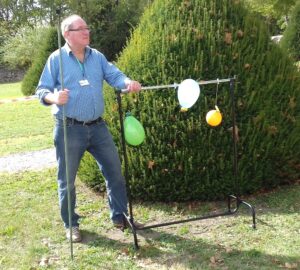 We were looking for fifteen thousand euros but in the end got only 2500 euros.
With the money we bought a Horizon H100 fuel cell for approximately 1500 euros (incl. taxes and shipping) as well as a 15 litres hydrogen cylinder at 200 bar from Linde for rent and various other components.

Harald and Olivier present the bicycle which has been equipped with an electric motot and models of fuel cell and hydrogen container.

A day of reflections and activity. 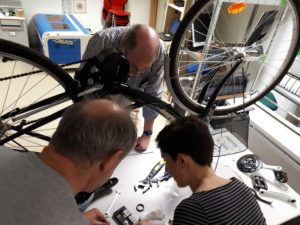 We thought of getting a bicycle from the bicycle pound in Geneva (http://www.fourriere-velo-ge.ch/ : “Our bikes are between 100 and 200 CHF depending on their condition”) but then Klaus found a little-used one in his cellar.

The bicycle should be a donation by one of the group members and the bicycle’s crankset motor BAFANG BBS01 will be a contribution from the Pangloss Labs association. 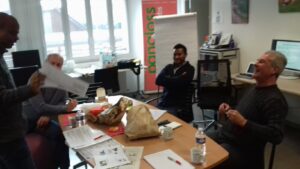 The idea is presented at the 2018 Science Festival in the Château de Voltaire at ferney Voltaire. 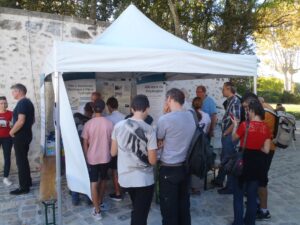 Harald, Klaus and Olivier visit Atawey, manufacturer of hydrogen refuelling stations. Atawey has a hydrogen bicycle. Harald had a ride on it. 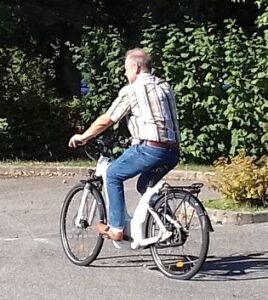 Following the Open Geneva Hackathon, a group of people intersted in hydrogen think about what actually could be done. The idea to develop an open source kit for converting a bicycle into a hydrogen powered electric bicycle is born.